Easy-peasy way to make this great traditional design. This is the Tri-Recs way – oh sew simple! The points are so accurate.

The Tri Recs Tools is not essential but it does make the patchwork much quicker, easier and more accurate. 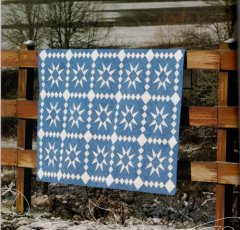 and this is fromGinnie’s Patchwork Exercise Book II.

For those who like the story behind the design….

AND a big apology – I got the name wrong … You just can’t get the staff these days!

Fifty-Four Forty or Fight!
The Development of the Boundary Between the U.S. and Canada

In 1818, the United States and the United Kingdom (controlling British Canada) established a joint claim over the Oregon Territory – the region west of the Rocky Mountains and between 42° North and 54°40′ North (the southern boundary of Russia’s Alaska territory).

Joint control worked for over a decade and a half but ultimately, the parties decided that joint occupancy wasn’t working well so they set about to divide Oregon.

The 1844 Democratic presidential candidate James K. Polk ran on a platform of taking control over the entire Oregon Territory and used the famous campaign slogan, “Fifty-four Forty or Fight!” (after the line of latitude serving as the northern boundary of Oregon at 54°40′). Polk’s plan was to claim and go to war over the entire territory for the United States.

Through negotiations with the British after Polk’s inauguration, the boundary between the U.S. and British Canada was established at 49° with the Treaty of Oregon in 1846. The exception to the 49th parallel boundary is that it turns south in the channel separating Vancouver Island with the mainland and then turns south and then west through the Juan de Fuca Strait. This maritime portion of the boundary wasn’t officially demarcated until 1872.

equipment | quilting
(You can use Quick Links, which are also on the left hand side of most pages, to find more content on specfic themes.) 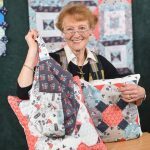 Jennie is a world renown quilt teacher, lecturer, author of nine quilt books and numerous patterns. From Houston to Qatar, Durban to Melbourne, Auckland and many other international cities, Jennie has wowed them all with her superb teaching style and hilarious lectures all laced with wit, charm and professional expertise.

There are no reviews yet.