Karen Cocksedge, who many of you know from www.karensquilts.co.uk and www.finishmyquilt.co.uk , recently had the privilege of quilting some wholecloths designed by Sean Edwards for his current exhibition.  She wrote a lovely article about her experiences and we thought you like to hear about it.

By Karen from Finish My Quilt

As I look out of the airplane window I can see a glittering Venice passing below. The end of a 7 month journey. The adventure started way back on a cold November day in 2018 when I got a telephone call asking if I could make some quilts for an artist’s upcoming exhibition. He had been studying the quilts at St. Fagans National Museum of History and wanted to include some Welsh wholecloth quilts in his show. There followed some discussions with his agent and finally we arranged to meet at St. Fagans and I finally met Sean Edwards. Sean had been chosen by the Art Council of Wales to represent Wales at La Biennale di Venezia.

Sean took me to see some of the quilts in the archives and then showed me some of the ideas he had so far. The old quilts that he really liked were made from cotton sateen and so it was decided that we would use this type of fabric too. Having decided this I went back to my workshop and did some samples for him using various types of wadding so that he could see how these different waddings would look in the end product. One of the waddings was a beautiful pure wool which looked like clean, carded wool. Because it was such a thick wadding (almost 2” thick) the finished result was really textural and this was the one which Sean chose. 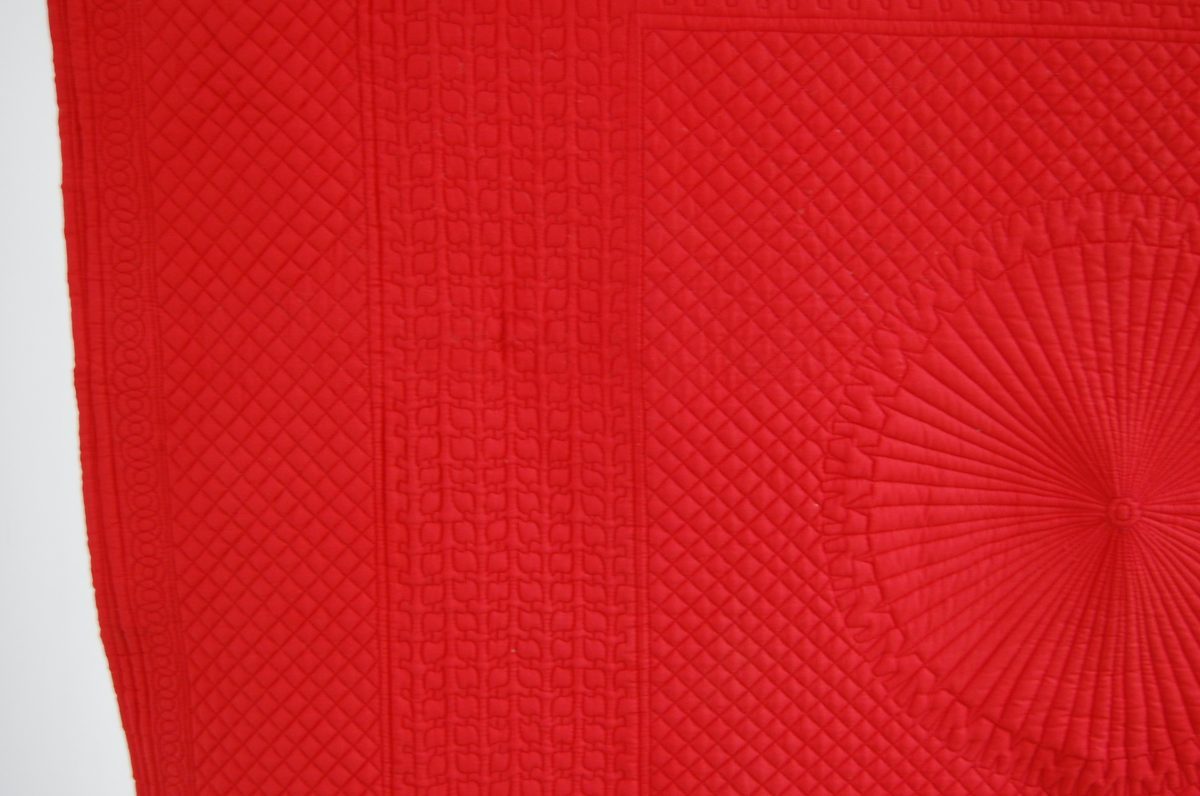 The idea of the exhibition was to showcase the everyday and reflect on things that influence our lives. Traditional Welsh wholecloth quilts used leaves, glasses, plates and other every day objects that came to hand for the designs. Sean wanted a modern twist on this idea and so he used the banners from the daily newspapers that were common when he was younger – The Sun, The Mirror and The Daily Mail.

Fabric and wadding chosen, Sean now revealed to me the final designs. Sean had done his original designs on a computer staying true to the idea of patterns sometimes having to be adjusted to fit the space available. The designs had been hand marked out beforehand on the fabric so now it was time to get quilting!

The first quilt I worked had a red front and a grey back. The outer band of quilting consisted of interlocking “O”s, then there was a wide border of cross hatching – something which was widely used by award winning Welsh quilter Jessie Edwards in the late 1940’s and early 1950’s. Some stylised letters made the next border and the central medallion radiated out from an “O” to culminate in a ring of “M”s. A red thread was used to blend in with the front of the quilt, but because of the thick nature of the wadding the texture made the design readily visible. As the back of the quilt was grey the red stitching really stood out.

The other quilt had a yellow front and a green back and a yellow thread was used. This design had a central diamond which was sub-divided into smaller diamonds (often called fields in Welsh quilting terms) and these were filled with stylised “S”s and “N”s. The diamond was then surrounded by cross hatching to make a square. A wide border of “N”s then one of “S”s more cross hatching and finally an outer border of “U”s and “N”s alternating.

These quilts had to be ready to be flown to Venice and hung by the end of March, so time was of the essence. Sean had special brackets made to hang the quilts so that they could be seen from both sides.

The Welsh Pavilion is in Chiesa di Santa Maria Ausiliatrice – from the outside not much to look at but once you step inside what a difference! I had been invited to attend the pre-launch preview and it was with great pride that I saw my quilts hanging in this prestigious event. After I returned home I saw that they had been featured in a BBC Wales news item.

It has been the highlight of my quilting career to work with Sean and it was an amazing experience to see his ideas come to life through my quilting skills. La Biennale di Venezia runs from 11th May through till 28th November. The full exhibition will then tour back to the U.K. appearing at Ty Pawb, Wrexham in spring 2020 before moving on to Bluecoat, Liverpool in the winter of 2020.