Many of us make quilts for our military hero’s but one of our viewers, Dr Jacqueline Jeynes written an amazing book entitled ‘Forgotten Pensioners of War;  FEPOW’s and their stories’; she was inspired to write this by her own father 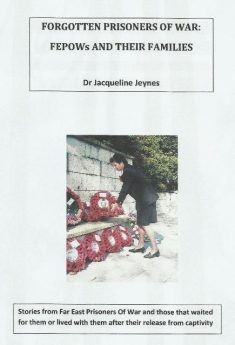 The book is a testament to everyone affected by the long, savage imprisonment of our military personnel in the Far East 1941-45, many of them like my father, just teenagers. There were thousands of civilian internees too, mostly women and children, not just from Britain of course as many American, Canadian, Australian, Dutch and New Zealanders were held captive.

These are the personal stories of POWs, internees and their families, collected over 25 years. But research evidence also gives a wider picture of the fall of Hong Kong and Singapore, the orders from Japan to kill everyone in the camps, by whatever means (issued a few days before the bombing of Hiroshima and Nagasaki), and shows just how desperate it had become by 1945.

To all those involved “We Salute You!”

If you are interested in obtaining a copy it is available through Amazon or you can contact Jacqueline directly:  jackiepencoed@gmail.com