By Jonathan Brown – Yorkshire Evening Post
Published on Wednesday 2 May 2012 06:30

A patchwork of people is piecing together craft mementos from a bygone era.

Around 15 craft-loving volunteers have tasked themselves with stitching together 30 quilt squares, made in the 1930s, and finding out more about the women who signed them.

The group came together after designer Jules Caton, from Ilkley, stumbled across the squares in a second hand shop in the Texan frontier town of Smithville last November. 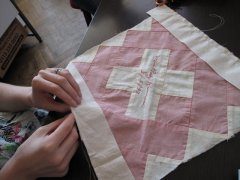 Led by Jules, the collective are looking to pull together the squares, while creating two more quilts that celebrate the white rose of Yorkshire and yellow rose of Texas.

The 46-year-old said: “It just intrigued me and I was captivated by finding out about the women who made this work but never put it all together.
“I would like to find out who these ladies are and we’ve looked up 10 of the names and they’re from a town called Paige in Texas.”

Jules was in the USA getting married and has since helped to form the group, which meets regularly at the River Meet Craft Cafe, in Leeds Road, Methley.

There are plans to create three quilts – one from the original squares, one representing both region’s roses signed by the current craft group members and a final quilt where people enter their designs for squares in a Yorkshire-wide competition.

Jules said: “A lot of the women were German during the depression and austerity which is quite nice in a creative and positive way now.
“It is the connection with the time as 1933 was the depression and there is lots of bad news here at the moment – I love the idea that we can pull together and get things going.
“There is the idea that a group of women can come together through friendship and support each other.”

The crafty collective of women, aged 30 to late 60s, includes an ex-lawyer, people who are retired, a quilting teacher and someone who used to work on costumes at the Royal Armouries in Leeds.

The not-for-profit project will end in exhibitions in Yorkshire and Texas next Spring, a book documenting the process and research into the original quilt squares.

Justhands-on.tv plan to visit the group early in September to film their project – so keep watching.